All coaches have their “go-to” drills – basically, an activity they continually come back to. One that consistently gets results or a guaranteed buzz from the group!

However, familiarity can breed contempt. And a good drill can become dry if over-relied on. This problem strikes at the heart of a key challenge for all coaches. How can you convince children (or adults) to perform drills that are good for them, without losing their interest.

One useful tactic is creating variations on your games….or “games withing a game”. By simply changing the emphasis a bit, adding a competitive element, or using incentives, you can sometimes trick players into doing what’s good for them.

“Games Within a Game” no.1: The Triangle Drill

The triangle drill is a cricket coaching staple! Most cricketers have done it at some point in their lives.

It is such a useful drill because it ticks two key boxes for coaches – a) keeping a whole group involved, and b) covering multiple fielding skills in one go. But nevertheless, it can get dry after a while.

Just in case you’ve never seen the triangle drill before, this is how it goes! The aim is to improve a fielding team’s throwing accuracy and backing up. 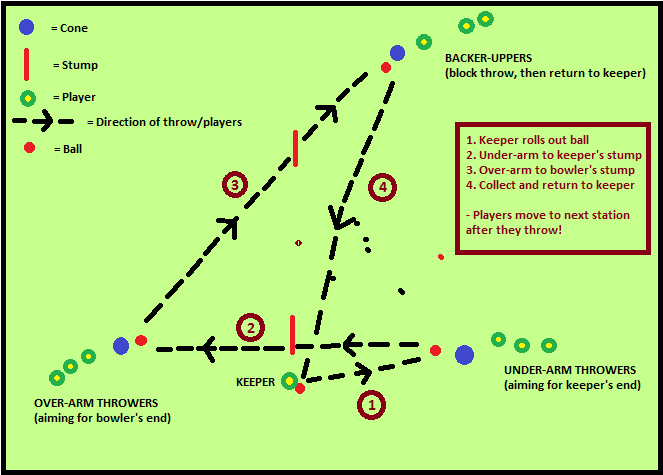 In mini-triangles, your team’s aim is to get all your player’s back to their start point

Instead of “following their throw”, players stay at their station (simply going to the back of their own queue) until one of the team hits a stump.

When this happens, EVERY PLAYER moves to the next station – in a clockwise direction.

The winning team is the one to:

Set up a regulation triangle drill….but with one slight change! In front of the keeper’s stumps, make a semi circle (radius about 3-4m) out of cones. 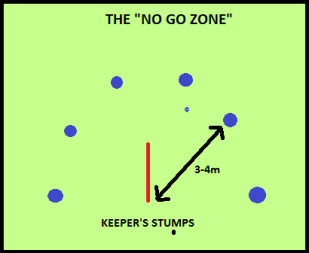 We call this semi-circle the “No Go Zone”. All throwers must prevent the ball from bouncing inside the semi-circle.

This rule is in place to force fielders to TAKE CARE when they throw – avoiding “half-volley” throws to the keeper at all costs.

SCORING: Points are awarded/deducted for the following:

Ball lands in semi-circle (No go Zone) = minus 3 points

Hesitation (eg/ everyone stops when stump is hit) = minus 3 points

Berating a teammate = minus 5 points

RACE TO A SET NUMBER OF POINTS (EG/ 35). Measure them by time or by “laps” (number of times the ball has completed a circuit of the drill)

Instead of lumping every player into a single group, create two rival teams.

This often works well as a “toss decider” for a match. The winning team’s captain will get to decide whether they bat or bowl first.

b) Give each team a points target – for example time how many minutes and seconds to get to 35 points?

Have you ever noticed that players always perform the triangle drill in a clockwise direction? Why not flip it round?

We don’t always turn left to throw, do we? Nor do we always run to out right to back up?

At any point of the drill, the coach shouts “REVERSE!”. When this happens, the ball will travel anti-clockwise instead of clockwise.

For this to happen, the backing up group must switch to a new cone. A new cycle can resume from whichever station had the ball when “reverse” was called! 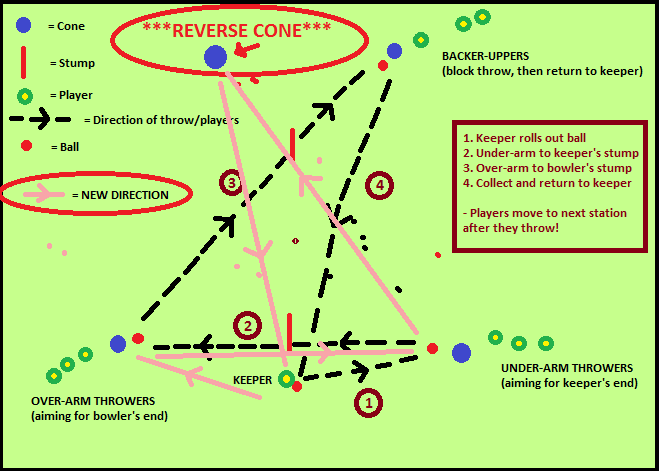 3 thoughts on ““Games Within A Game”: Triangle Drill. 4 different takes on a coaching classic!”